ATLANTA, Feb. 26, 2015 – A design so distinctive that it could be recognized by touch alone and so unique that it could be identified when shattered on the ground. This was the brief for the creation of the Coca-Cola bottle which is 100 years young this year. To mark this milestone, The Coca-Cola Company is celebrating with a year-long campaign that includes new advertising, a music anthem and a series of art exhibits featuring works from some of the world’s leading contemporary artists including Andy Warhol, Norman Rockwell and Peter Blake.

Born on Nov, 16 1915, the Coca-Cola bottle was the creation of the Root Glass Company in Terre Haute, Ind. With its unmistakable curves and a distinctive contour, the bottle has become a global icon, inspiring a century’s worth of signature moments in film, social history, design and the fine arts.

“Since its creation in 1915, the Coca-Cola bottle has achieved iconic status as a symbol of refreshment and uplift and it remains an important asset for our business today.” said Marcos de Quinto, Chief Marketing Officer, The Coca-Cola Company. “The campaign, which will be executed in over 130 countries, is our invitation to consumers around the world to share in the specialness of an ice-cold Coca-Cola.”

The Coke Bottle 100 campaign will come to life through a number of elements, including: 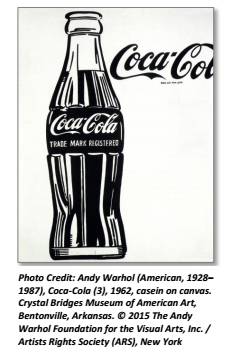 The High Museum of Art, in collaboration with The Coca-Cola Company, will present The Coca-Cola Bottle: An American Icon at 100, a four-part exhibit that will salute the Coca-Cola bottle and its special place in the worlds of art, design and  commerce over the past 100 years. For the first time ever, two original Andy Warhol Coke Bottle paintings will be displayed alongside more than 100 original bottle-inspired artworks and photographs. The exhibit will also include original bottle prototypes and sketches and will open to the public on Feb. 28 and close on Oct. 4, 2015.

A traveling art exhibition, The Coca-Cola Bottle Art Tour: Inspiring Pop Culture for 100 Years, will take consumers on a unique, multi-sensory journey featuring an array of Coca-Cola bottle themed art, historical artifacts and interactive experiences which showcase the Coca-Cola bottle’s role in art and popular culture. The exhibition will visit more than 15 countries and travel 62,000 miles around the world in 2015.

The Coca-Cola bottle’s legacy will be explored through film in 14 unique television and digital films that will be aired globally in 2015. One spot from Ogilvy & Mather Paris tells the epic tale of the creation of the Coca-Cola bottle, as narrated by a big brother to his younger sibling. The bottle travels through distant lands and curious settings, captivating the boy’s imagination. It is through this journey that the bottle obtains its unique features – its iconic curves, its flutes and red ribbon – and gets filled with icy-cold Coca-Cola as it ends its ride back in the hands of the refreshed older brother. The additional spots were produced by Ogilvy & Mather Paris, Wieden + Kennedy Portland, Sid Lee Canada and McCann Madrid. 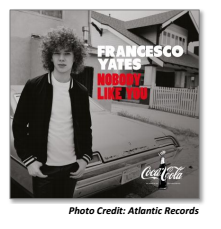 “Nobody Like You” is the new music anthem for the Coca-Cola bottle campaign from 19 year-old, Canadian singer/songwriter Francesco Yates. Originally discovered at 16 years old, Yates is now signed to Atlantic Records. The anthem’s lyrics tell both a traditional love story and serve as an ode to the contour shape of the Coca-Cola bottle and the specialness of shared moments. “Nobody Like You” debuts today and is available via digital download. The song will also appear on radio and in Coca-Cola television commercials throughout 2015. 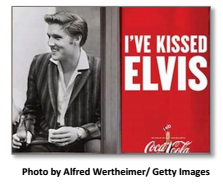 Iconic pop-stars and notable Coca-Cola fans Marilyn Monroe, Elvis Presley and Ray Charles unite in the new ‘Kissed By’ global out of home, digital and retail campaign. The images feature the stars being ‘kissed by’ the Coca-Cola bottle, an experience shared across generations for the last 100 years. Between takes at RCA Victor’s Studio 1 on East 24th Street in New York City, American musician Elvis Presley laughs as he drinks a Coca-Cola on July 2, 1956. At the recording session, Presley and his band recorded both ‘Hound Dog’ and ‘Don’t Be Cruel’. Throughout the year, local markets will further leverage ‘Kissed By’ featuring modern-day celebrities and musical icons. 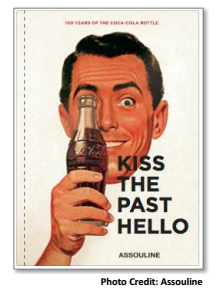 Coca-Cola, in partnership with French publishing house Assouline, will release a limited-edition book highlighting the rich history of the Coca-Cola bottle, titled Kiss the Past Hello. In addition to famous artwork featuring the Coca-Cola bottle, The Coca-Cola Company invited contemporary artists and designers from around the world to reinterpret the bottle in their own signature aesthetic. The result is a stunning array of “mash-up” artwork, which will be showcased in the book when it is released in March 2015.

To share our rich heritage with our consumers in a contemporary way, we have created an interactive journey through the Story of the Coca-Cola Bottle App that takes you through a behind-the-scenes look at our Coca-Cola Archives featuring stories about both the brand and the bottle from inside our headquarters in Atlanta. The free App will be available in both Apple and Android formats.

Throughout the year, Coca-Cola Journey will act as a hub for all centennial celebration content, providing a single destination for consumers to experience the campaign.

About The Coca-Cola Company

The Coca-Cola Company (NYSE: KO) is the world’s largest beverage company, refreshing consumers with more than 500 sparkling and still brands. Led by Coca-Cola, one of the world’s most valuable and recognizable brands, our Company’s portfolio features 20 billion-dollar brands including, Diet Coke, Fanta, Sprite, Coca-Cola Zero, vitaminwater, POWERADE, Minute Maid, Simply, Georgia, Dasani, FUZE TEA and Del Valle. Globally, we are the No. 1 provider of sparkling beverages, ready-to-drink coffees, and juices and juice drinks. Through the world’s largest beverage distribution system, consumers in more than 200 countries enjoy our beverages at a rate of 1.9 billion servings a day. With an enduring commitment to building sustainable communities, our Company is focused on initiatives that reduce our environmental footprint, support active, healthy living, create a safe, inclusive work environment for our associates, and enhance the economic development of the communities where we operate. Together with our bottling partners, we rank among the world’s top 10 private employers with more than 700,000 system associates. For more information, visit Coca-Cola Journey at www.coca-colacompany.com, follow us on Twitter at twitter.com/CocaColaCo, visit our blog, Coca-Cola Unbottled, at www.coca-colablog.com or find us on LinkedIn at www.linkedin.com/company/the-coca-cola-company. 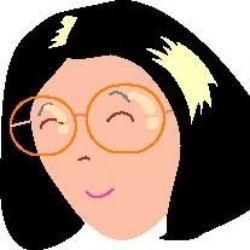 Jennyfer Tan
I’m your go-to girl-Friday for your tech, Web, and program concerns. As the “techie troubleshooter,” I can help you understand about computers, BOTH hardware recommendations and program-related solutions. I help you process the solutions when these matters confuse you.

This site uses Akismet to reduce spam. Learn how your comment data is processed.